Skip to content
There is declaration a new rule for the TV subscribers.
About 1.2 crore people in Bangla only cable TV subscribers But they are going to get angry. Because now only the TV viewing rate is going to increase twice to three times.For TV TVs, Trial Monthly price is Tk 130 per month without taxes to see 100 free-to-air channels. After this, the MSO companies will have to tell the prices to the subscribers according to their price per-channel for broadcasters and MSO companies. Customers will pay for their favorite channels separately. 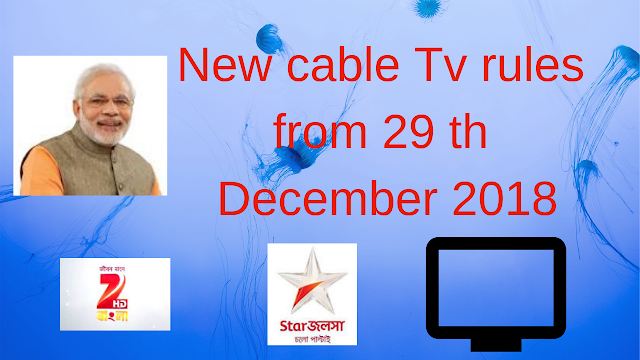 Each channel will be charged for a separate amount, each channel will cost from 50 paisa to 19 rupees. The higher the channel’s popularity, the higher the price of the channel.You have to pay extra amount to get popular channel.This system is going to start from the next month.According to the trial order, if a channel wants to see a subscriber, the highest price is 19 taka. And if the broadcaster company’s channel shows, then it would be worth noting that those channels will not be less than 85 percent of the sum total. However, the Supreme Court has dismissed the order not to exceed 85 per cent of the amount of the channel’s bid for the Madras High Court Channel.
Now, in addition to any tax, the price of monthly cable TVs in Kolkata and adjoining areas is Rs. 240, 300, 330 and 370 respectively. To see the number of channels in the package, the cost will increase twice to double on December 29, said a cable operators from North Kolkata.
Currently, most of the cable subscribers pay monthly  to the operators according to the package. In those packages, MSO companies keep many channels, which customers never see or want to see. Until then, they were obliged to pay for them too. Now they will be able to choose the channels they like.Cable and DTH distributors feared that new and relatively less popular channels would get sick. As a result of these channels, the distributors would be dragged on the rails, thinking that the opposition was created. However, the court ordered the recommendation of the trial to continue. As a result, the payment of money will be started tomorrow, according to the channel.
Tray wants to give enough time to cable operators and MSOs to inform customers about new rules and collect the list of favorite TV channels from them.Since December 29, the new rules of Cable TV were to be introduced. If the list of preferred TV channels is not selected in the day, then the pay-channel will be closed for the first time. Customers will get so much relief in Tri-new guidelines. Those who have already announced the list of preferred TV channels are simply operators, they will also be able to watch the channel as per their preferences from 1st February. By January 21, TRAI has just tied operators for the list of preferred channels from all the customers.

Please subscribe to my channel
‘RD Tech Channel’
for various government and technical updates.
Thanks for visit my Blog